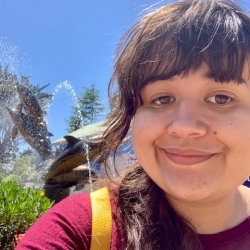 I was trained in Classics at UC Davis and received my B.A in Languages and Literatures at UC Davis. I primarily focused on emotion, gender roles, sex, and bodies in Hellenistic literature, working primarily with Sophocles and his work Philoctetes. I have done translation work in Latin, Greek, French and Arabic and lean heavily towards cultural representations of images and language in creating the constructs of gender, science and sexuality. I wanted to by being in Classics work closer with untranslated texts in order to add my own insight to the way the culture functioned through language.

I finished a Master's at San Francisco State in 2019 where I focused on Medieval and Early Modern Europe where I focus on Performative Gender, Sodomy Laws and Muslim and Christian Interactions through Science during the 11th-13th century.

I am currently in the Master's of Arts in Comparative World Literature for a second Master's Degree.