In both teaching and research, I love to explore the juncture of history and literature. As art imitates life and life also imitates art, I believe history and literature can inform each other in numerous ways. This is particularly true with regard to China, where an amazingly exuberant literary tradition has for millennia molded the collective mentality and behavior of not only the intellectuals but also the semi-literate and even the illiterate populace. Furthermore, many Chinese historians double as essayists and storytellers. In addition to producing official historical records, they examine historical controversies, suggest alternative interpretations and investigate historical probabilities in their literary works. Therefore, to get a fuller picture of historical truth in both the spiritual and the materialistic aspects, I take an interdisciplinary approach to history, looking at both non-fictional and fictional source materials.

Sima Qian, the greatest historian of ancient China, assigned historians a special mission: to unearth the stories of unsung heroes. My biggest unsung hero so far, research-wise, is Feng Menglong, a marginalized humorist, storyteller, historian and political activist, who spent the last years of his life trying to restore Ming China, whose government had failed to recognize his talent and patriotism. To Feng Menglong, only those who are children at heart can do truly heroic deeds, because they are driven by spontaneous emotions, without calculating what it is going to cost them. Isn’t this romantic? 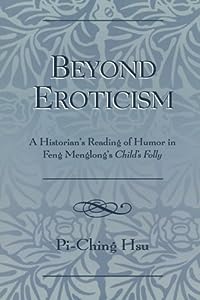