San Francisco witnessed an explosion of social unrest and the development of social movements dedicated to undermining racism in the early 1960s. Informed by the increasingly contentious drive for civil rights in the South, as well as by the discriminatory conditions that had long existed in the Bay Area, various groups and individuals joined forces in 1963 to push for social and economic justice in northern California.

During 1963 and 1964, the United San Francisco Freedom Movement, an umbrella group composed of a number of civil rights and student organizations, challenged discrimination by directly confronting Bay Area employers known for their prejudiced hiring practices.

Demonstrations against the Select Rental Agency, Mel’s Drive-In restaurants, Lucky grocery stores, the Sheraton-Palace Hotel, the Cadillac automobile agency, and the Bank of America challenged the prejudicial treatment received by black, Asian American, and Latino San Franciscans in the realm of employment. In the process, civil rights activists contested entrenched social relationships, racial understandings, and the economic status quo. Their efforts in 1963-1964 precipitated the militant efforts for social change and racial justice during the late 1960s.

This section showcases the movement for civil rights in San Francisco during the early 1960s. It provides newspaper articles, photographs, documents, and video oral histories, cataloging an era of confrontation and activism. Based at San Francisco State University, the project seeks to bring to life an important period in the history of the San Francisco Bay Area.

A short history of the Alice B. Toklas
Lesbian, Gay, Bisexual and Transgender Democratic Club. 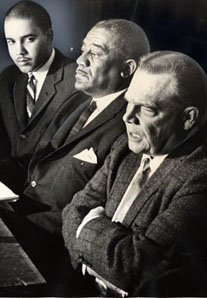