The job discrimination campaigns waged by Bay Area civil rights groups achieved important victories for racial and economic equality, but not without some costs.  By August of 1964, local companies signed over 220 separate hiring agreements. While Bank of America refused to sign an agreement with CORE, it did sign a memorandum of understanding with the Fair Employment Practices Commission, agreeing to hire 400 new African American employees. In July, companies that were afraid they would be targeted next, like Pacific Gas and Electric, Pacific Telephone and Telegraph, and the western Greyhound bus lines, all announced hiring agreements through the Public Utilities Commission.

Although largely successful, the arrests incurred during the campaigns were beginning to take their toll on activists and organizers by mid summer.  Over 600 people had been arrested during the previous nine months and court trials were proving costly and exhausting.  Many trials resulted in hung juries and expensive retrials.  Juries seemed willing to find lead organizers guilty and once convicted judges applied harsh sentences.  Tracy Sims was convicted and sentenced to ninety days in jail and a $200 fine.  Nat Burbridge, head of the San Francisco NAACP, was sentenced to nine months in jail for his leadership role in Auto-Row direct action campaign.  Tied up in legal battles and checked by the intransigence of the three-month Bank of America campaign, energy for the job discrimination campaigns began to fizzle.

But local activists were also turning their attention to other struggles. Many student participants went on to organize on the campuses of UC, Berkeley and San Francisco State, some participating in the Free Speech Movement at Berkeley the following fall.  CORE activists became increasingly attracted to militant and Black Nationalist approaches to social struggle.  Many others became involved with the movement against the war in Vietnam, linking the issues of civil rights and anti-war organizing.  As groups and individuals became increasing radical, they met harsh opposition from conservative, corporate, and government sectors. Anticipating future conservative reactions, a deluge of hostile letters flooded Mayor Shelley’s office following the Sheraton Palace campaign.  And years later, after a trip to Vietnam by local organizers in 1966, the national offices of the DuBois Club were bombed. The job discrimination campaigns in San Francisco ushered in an era of increasingly militant and radical social struggle. 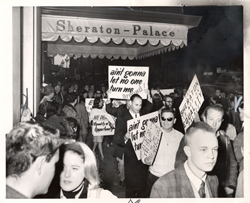