One of the most dramatic moments of the 1963-1964 United San Francisco Freedom Movement came in March of 1964 when a number of civil rights organizations led by the Ad Hoc Committee Against Discrimination converged on the swanky Sheraton-Palace Hotel. During the beginning of the month, a sea of protesters occupied the hotel’s lobby, demanding an end to discriminatory hiring and promotion practices. The Palace sit-ins resulted in hundreds of arrests and, after several negotiations between civil rights leaders and hotel management, a signed pact guaranteeing the employment of a substantial number of minority workers in a variety of positions. 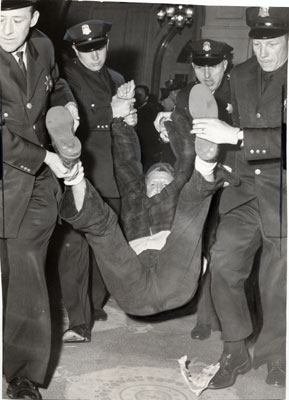