In October of 1963, after investigating the prejudiced hiring practices at the popular Mel’s Drive-In restaurant chain, civil rights activists in the student-formed Direct Action Group and W.E.B. DuBois Club began a high-profile picketing campaign against the eatery. The owner of Mel’s, San Francisco Supervisor Harold Dobbs, was running as the Republican candidate for mayor at the time, heightening the level of attention paid to the pickets by the press. After weeks of protests and dozens of arrests, restaurant management signed an agreement, which included provisions for immediate nondiscriminatory hiring and the establishment of training schools. The negotiations signaled a major turning point for civil rights in the city. 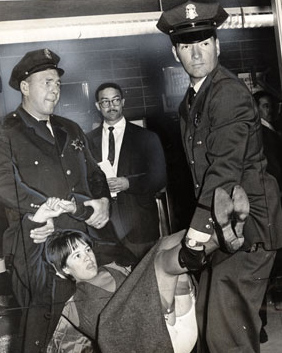